Can We Really Multitask? 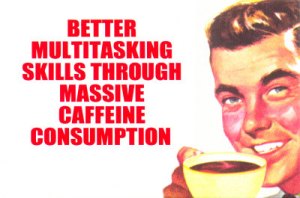 The latest post at PsyBlog discusses a classic study on multitasking, in which two participants were reportedly taught to read and write at the same time.  From the post:

Professor Elizabeth Spelke and colleagues at Cornell University wanted to know whether we can really divide our conscious attention between two demanding tasks, like reading and writing. To find out they recruited two participants willing to put in 29 hours of practice over a 6 week period: Diane and John were their volunteers (Spelke, Hirst & Neisser, 1976). Before the training Diane and John’s normal reading and comprehension rates were measured, so it could be compared with post-training. Then Spelke and colleagues set about their three-phase training regime.

There are a number of objections to this study, all discussed at PsyBlog (the most obvious being that two people is not a legitimate sample size). The one that’s most relevant to the current debate on this topic is this:

Diane and John were learning to switch their attention from one task to the other very quickly, not focus on both at the same time.

The multitasking vs task-switching debate is an important one because it touches on a fundamental aspect of brain functioning: whether attention can be simultaneously divided between two or more tasks–each performed with equal precision–or if attention must be switched between the tasks, like a railroad switch redirecting a train.

The University of Michigan Brain, Cognition and Action Labortatory has done quite a lot of work on this topic, which you can review in depth here.  Great information to be found there if you want to learn more about the essential aspects of the debate.

John Medina, author of Brain Rules, is an outspoken critic of multitasking. I’ll wrap this post with a snippet from his Brain Rules video series–another good resource for those wanting to pursue this topic further.

Filed under About Neuroscience

6 responses to “Can We Really Multitask?”