What’s More Potent, Testosterone or the Power of Belief? 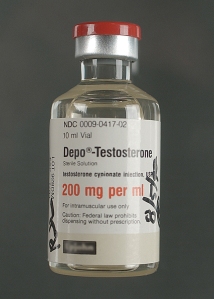 When most people think of testosterone, words like “aggression,” “dominance,” and “violence” usually come to mind.  Those words are memetically linked with testosterone the way “expensive” is linked with diamonds, and most of us have adopted the linkage without thinking much about it.  Collectively, we’ve adopted a “folk hypothesis” about testosterone–a generalized presupposition grounded in folk wisdom assumed to be correct.

What makes folk hypotheses noteworthy is that they’re hard to challenge–not because they are fact-based, but because they are so deeply entrenched in collective thinking.  So I was intrigued to come across a study in the journal Nature that takes on the testosterone folk hypothesis directly, and also manages to illustrate something important about the power of belief.

A fair amount of evidence has surfaced that testosterone is a key ingredient in social relations, not by increasing, but by decreasing conflict. With that in mind, researchers wanted to know what would happen if they gave a group of female subjects a sublingual dose of testosterone before playing the ultimatum game (the bargaining game in which one subject must negotiate with another about how to divide a sum of money. If an agreement is reached, both parties get the money as agreed. If an agreement isn’t reached, neither get the money).  The subjects were not told whether they were receiving a placebo or true testosterone, only that they were getting a dose that could be either.

The folk hypothesis about testosterone predicts that it will increase unfair bargaining by making one of the parties more conflictual and less willing to negotiate.   In the ultimatum game, unfair bargaining means offering significantly less than 50% of the sum. Typically if less than 50% is offered, the other party will not agree because he or she would rather that neither party receive the money than accept the indignity of being treated unfairly. If someone with a testosterone boost is experiencing heightened feelings of dominance and aggression, it makes sense that fairness wouldn’t be top of mind.

The results, however, were exactly the opposite. Overall, those subjects that actually did receive testosterone were not less fair but significantly more fair in their dealings.  So much for the folk hypothesis.

But that result, though compelling, is not the most telling part of this study.  After the games were played, researchers asked the subjects if they believed they had received a dose of testosterone or a placebo. Subjects who believed they were receiving a dose of testosterone, whether they actually did or not, acted the part.  Thinking they were negotiating under the influence of a notorious hormone, their bargaining behavior followed suit and was significantly less fair than that of those who thought they had only received a placebo.

So as much as this study showed that the folk hypothesis about testosterone is flawed, it also showed that belief is a powerful enough agent to induce effects presumed to be true.  It’s even more powerful than the infamous chemical in question. Time and time again, belief proves itself the strongest bully on the cognitive block.

Filed under About Belief, About Research

5 responses to “What’s More Potent, Testosterone or the Power of Belief?”