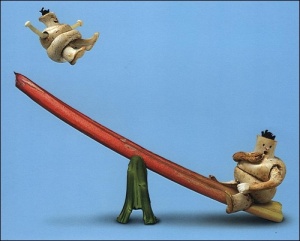 The April issue of Psychological Science includes an interesting paradoxical study on moral self-regulation.  Building on previous research that examines why people act altruistically even when such action is costly, researchers wanted to take a closer look at the moral back-and-forth we all engage in when deciding how to act.

In the spotlight are two polar opposite terms:  moral cleansing and moral licensing.  Moral cleansing is the tendency to engage in a moral behavior to offset negative feelings of self worth.  For example, if someone feels bad that they don’t regularly recycle, they might be strolling through a Home Depot one day and decide to buy a boxful of energy-efficient light bulbs to switch out all the less-efficient bulbs in their house.  The self-worth deficit of the first lack-of-action is offset by the self-worth boost of the second.

In the case of moral licensing, someone may be inclined to either act immorally, or (more likely) not act at all, if they already have a self-perception of being a moral person. For example, if someone just volunteered to work a charity event, they may be less likely to give blood during a blood drive the following week.  The first action produced a moral-currency surplus that boosted self-worth, and acted as a “pass” not to engage in the second action.

In the first experiment, participants were asked to write a self-relevant story using words that referred to either their positive or negative traits.  After finishing, they were told that the research lab was interested in supporting social awareness and usually asks participants if they would like to make a small donation to the charity of their choice. Participants were told they could write down the charity and the amount they wanted to donate (note, they were not aware of any link between the story they wrote and the charity donation).  The result: participants who used positive words about themselves in their stories donated one fifth as much money as those who used negative words.  A follow-up experiment verified these results.

In the final experiment, participants completed the same positive/negative-words story as in the first, but were then asked to take part in another study focused on the best way to reduce pollution at manufacturing plants.  They were given a scenario of being in charge of a plant that was under pressure from environmental lobbyists to run pollution filters on smokestacks, at a monetary cost, and presented with the cost of running the filters for varying percentages of time.  The standard, “legally agreed upon” amount of time was 60%, at a cost of $1.2 million.  Or, they were told they could deviate from this agreement and choose to run the filters for any 10% interval of time up to 100%, with each interval costing $0.2 million.  In effect, participants were being asked to make a decision between cost to the company or improving the environment.  They were also asked a number of follow-up questions, such as what they thought the responsibility of  a plant manager should be in this situation, and how likely they thought it was that they’d be caught if they decided not to adhere to the agreement.

The results: participants who used positive words in their self-relevant stories were significantly more likely to run the pollution filters less often than those who used negative words.  They were also more likely to say that plant managers should place profit ahead of environmental concerns, and were less likely to believe they’d be caught if they broke the agreement.

So this study suggests that our perceived level of self-worth effects our moral decisions.  More specifically, it suggests that feelings of negative self-worth can predispose us to acting morally in an effort to fill up the self-worth bank account.  If the account is already full, we might be predisposed to choosing not to act morally, or just not act at all.

That being said, there are many caveats that make this study less than complete. For example, the last experiment doesn’t really tell us if moral licensing was going on because there was no way of gauging how much moral activity any of the participants had engaged in prior to the study — this would have been useful to know. Also, we don’t know if some participants believed that acting firmly in the interests of the company was the more moral decision, particularly since such a high cost might affect jobs, workers’ benefits, etc.   But, there’s enough here to be thought-provoking nonetheless.

Filed under About Morality, About Research