Finding the Money Illusion in the Brain 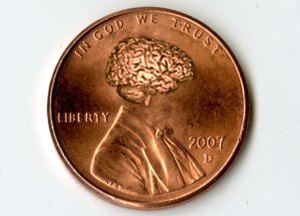 One of the daggers that have pierced the heart of the long-held economic rationality assumption (that we are all rational actors on the economic stage) is the “money illusion” proposition.  Rather than only rationally considering the real value of money (the value of goods that it can buy), we actually consider a combination of the real value and the nominal value (the amount of currency) – and sometimes we ignore the real value altogether.

Using an example from the book Choices, Values and Frames by psychologist Daniel Kahneman, let’s say that you receive a 2% salary increase. Unfortunately, the rate of inflation when you receive this increase is 4%.  In real terms, you are actually in the hole by 2%, which, under the rationality assumption, we’d expect would elicit a negative reaction — the same as we’d expect if someone got a 2% pay cut.  But this isn’t how most people react. Rather, the reaction to the real loss of 2% is tempered by the reaction to the nominal gain of 2%.  In effect, the nominal evaluation interferes with the real evaluation, hence the money illusion.

Now a new fMRI study in the Proceedings of the National Academy of Sciences has tested whether the brain’s reward circuitry exhibits the money illusion, and it turns out that it does.  From the study abstract:

Kahneman often uses a perceptual illustration to show how the money illusion works.  In the image to the left, there are two ways to interpret what we see: as two dimensional figures or as three dimensional objects.  If asked to evaluate the relative size of the figures, it’s necessary to rely on a two-dimensional interpretation to arrive at the correct answer. But, the three-dimensional assessment of the objects’ size biases our perception because it is more accessible, making it difficult to see that the objects are all exactly the same size.

Same goes for how we perceive money: the real evaluation necessary to arrive at the correct answer is biased by the nominal evaluation that makes arriving at this answer difficult.  In a perfectly rational world, that wouldn’t be the case, but by now we know this ain’t a perfectly rational world — and as this study shows, we’re beginning to identify the brain dynamics underlying that fact.

Filed under About Neuroscience, About Perception, About Research

10 responses to “Finding the Money Illusion in the Brain”