Tis’ the Season for Merry Obsessions 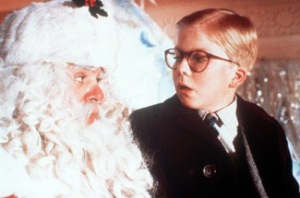 I listened to a story on NPR about the 25th anniversary of the movie A Christmas Story, which has summarily displaced It’s a Wonderful Life as America’s favorite holiday movie (you can catch it somewhere on cable TV at every hour of every day the week of Christmas, no exaggeration).

During part of the story, NPR replayed an interview with the writer of A Christmas Story, famed radio personality Jean Shepherd, who also narrated the film.  He said something that struck me as peculiar, but oddly comforting. Paraphrasing from the interview:

And it works.  The late great Mr. Shepherd had it right – obsession can indeed be very funny.  Whether it is by nature funny, as he implied in the interview, is another story.

And now (as if it isn’t on TV enough), the flag pole scene…