I want to pick up on an excellent post at The Frontal Cortex that discusses the effects of lead exposure, particularly from paint, on IQ levels in children.  I formerly managed a public health campaign as a consultant to the U.S. EPA that focused on raising awareness about the dangers of lead exposure and have a few insights to add to the discussion. (That was our main campaign message and advertising to the left).

As Jonah at The Frontal Cortex notes, increased blood lead levels have been linked to lower IQs, behavioral problems in children, and even increased criminal behavior.  In the U.S., the problem is especially acute in houses built before 1978, when high-level lead paint was the mainstay choice of contractors. A large portion of homes in the Northeast U.S. fall in this category, as do homes in older sections of the Southeast (I conducted most of my research in the Southeast, in older cities like Savannah, Georgia and Tampa, Florida).  In 1978, the Consumer Product Safety Commission banned the sale of lead-based paints for use in residences, and contractors who built those houses were required by law to disclose whether lead paint was used in the house – but for many years it was business as usual.

What I discovered in my research was that most people who live in pre-1978 houses do not realize, by far, the danger to their children lurking in their homes. In survey after survey, when I asked parents if they had ever considered lead exposure to be a significant health issue, most looked at me blankly, or said that they had some vague idea about there being “some sort of issue” but never gave it any thought beyond that. The percentage that had concrete knowledge of the problem was minuscule, and the percentage that ranked it as a problem to be concerned with was even smaller. So many other life dangers are obvious, how could lead paint even rank on the list?

This is a real problem, for all the reasons mentioned, and it disproportionately affects urban areas with older homes and apartments. In many of the same buildings that have had all asbestos removed (because that health scare was widely covered for many years) there is still lead paint on every wall.

For a sense of how severe the effect of lead exposure can be, look at the graphic below from an Enviornmental Health Perspectives study and note the drop in mean IQ scores as blood lead levels increase. 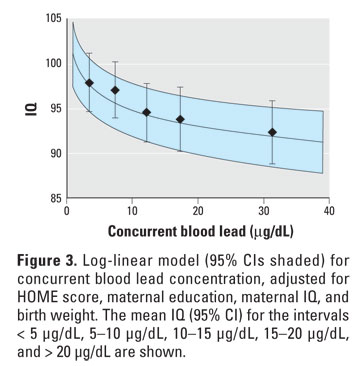 As mentioned, the main way children are exposed to lead is via paint, and here’s how it happens: lead paint eventually dries and chips, especially around windows and doors, and these chips collect on window sills, on the floor, etc.  Children pick them up and put them in their mouths (as kids like to do with most anything small enough to fit) and are exposed.  Also, when the paint chips it eventually disintegrates, becoming dust in your homes’ air, which is then imperceptibly inhaled. Lead paint used on the outside of the house also chips and disintegrates into the soil. When kids play in the soil around the house, they are exposed.  Lead can also seep into plumbing, effecting the water supply to the residence and be ingested in any number of ways.  For pregnant women, in addition to children, this is a significant issue because fetal tissue is highly susceptible to lead damage.

Quoting from The Frontal Cortex, with reference to the watershed 2003 New England Journal of Medicine lead study:

[the study] found that blood levels of lead above current federal and international guidelines of 10 micrograms per deciliter produce a surprisingly large drop in IQ of up to 7.4 points. The researchers estimated that one in every 50 U.S. children has lead levels above that guideline. Seven points of IQ might not sound like a lot, but when you’re at the lower end of the IQ spectrum those points can be pretty crucial.

So the problem is very real, and the scary part is that no one really knows how big the impact is worldwide.

Credit for graphic to the U.S. Environmental Protection Agency, and Jeff Neale, principal writer and designer

Filed under About Neuroscience, Books and Ideas